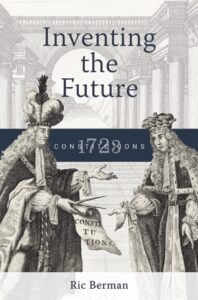 Ric Berman’s short history of the origins of the 1723 Constitutions outlines the Enlightenment principles embedded in that seminal document and provides an overview of the political and social context to Modern Freemasonry. It draws pen portraits of the main Masonic protagonists and delves into the issues discussed and debated on this website.

The book is a companion to the 2023 Exhibition – ‘Inventing the Future’ – at the Library & Museum of Freemasonry, Freemasons’ Hall, Great Queen Street, London, running from January – December 2023.

‘Inventing the Future’ is available at The Shop at Freemasons’ Hall and online at Amazon.

“Freemasonry is one of the oldest and most widespread voluntary organisations in the world. Over the course of three centuries men (and women) have organized themselves socially and voluntarily under its name. With a strong sense of liberation, moral enlightenment, cosmopolitan openness and forward-looking philanthropy, freemasonry has attracted some of the sharpest minds in history and has created a strong platform for nascent civil societies across the globe. With the secrecy of internally communicated knowledge, the clandestine character of organization, and the enact of rituals and the  elaborate use of symbols, freemasonry has also opened up feelings of distrust, as well as allegations of secretiveness and conspiracy.

This Very Short Introduction introduces the inner activities of freemasonry, and the rituals, symbols and practices. Looking at the development of the organizational structure of masonry from the local to the global level, Andreas Önnerfors considers perceptions of freemasonry from the outside world and navigates through the prevalent fictions and conspiracy theories. He discusses how freemasonry has from its outset struggled with issues of exclusion based upon gender, race and religion, despite promoting tolerant openness and inclusion. Finally Önnerfors shines a light on the rarely discussed but highly compelling history of female agency in masonic and para-masonic orders.”

“Insiders call it ‘the Craft’. To the rest of us, Freemasonry is mysterious and suspect. Yet its story is peopled by some of the most distinguished men of the last three centuries. Founded in London in 1717 as a set of character-forming ideals and a way of binding men in fellowship, Freemasonry proved so addictive that within two decades it had spread across the globe. Masonic influence became pervasive. Under George Washington, the Craft became a creed for the new American nation. Masonic networks held the British empire together. Under Napoleon, the Craft became a tool of authoritarianism and then a cover for revolutionary conspiracy. Both the Mormon Church and the Sicilian mafia owe their origins to freemasonry. The Masons were as feared as they were influential. In the eyes of the Catholic Church, Freemasonry has always been a den of devil-worshippers. For Hitler, Mussolini and Franco, the Lodges spread the diseases of pacifism, socialism and Jewish influence, so had to be crushed.” 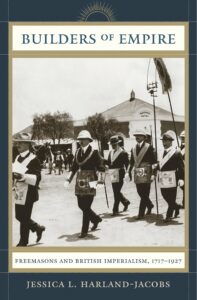 “They built some of the first communal structures on the empire’s frontiers. The empire’s most powerful proconsuls sought entrance into their lodges. Their public rituals drew dense crowds from Montreal to Madras. The Ancient Free and Accepted Masons were quintessential builders of empire, argues Jessica Harland-Jacobs. In this first study of the relationship between Freemasonry and British imperialism, Harland-Jacobs takes readers on a journey across two centuries and five continents, demonstrating that from the moment it left Britain’s shores, Freemasonry proved central to the building and cohesion of the British Empire. The organization formally emerged in 1717 as a fraternity identified with the ideals of Enlightenment cosmopolitanism, such as universal brotherhood, sociability, tolerance, and benevolence. As Freemasonry spread to Europe, the Americas, Asia, Australasia, and Africa, the group’s claims of cosmopolitan brotherhood were put to the test. By tracking an important, identifiable institution across the wide chronological and geographical expanse of the British Empire, Builders of Empire makes a significant contribution to transnational history as well as the history of the Freemasons and imperial Britain.” 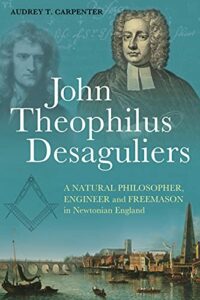 “This is the first comprehensive biography of a major, but neglected, figure of his age. John Theophilus Desaguliers made his mark on the eighteenth century in several diverse ways. He was an assistant to Sir Isaac Newton and later elucidated the difficult concepts of Newtonian physics in private lectures. He was a member of the Royal Society, and was presented with the Society’s highest honour, the Copley Medal, no less than three times. He was a pioneering engineer: the water supply of Edinburgh, the ventilation of the Houses of Parliament and the first Westminster Bridge all owed him a debt. In a different sphere, Desaguliers became the third Grand Master of the Grand Lodge of the Freemasons which was founded in 1717. He is remembered worldwide for his seminal influence during those early days of Freemasonry. He also wrote poetry and had an influential circle of patrons, including George I and Frederick, Prince of Wales (whom he initiated as a Mason at a specially convened lodge at Kew). This biography, based on original research, describes a charismatic character who was a major figure of his age.” 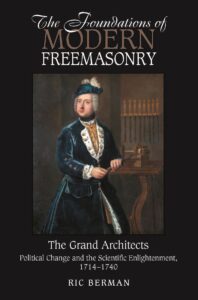 A detailed academic assessment is taken in The Foundations of Modern Freemasonry. “Following the appointment of its first noble Grand Masters in the 1720s and in the wake of its connections to the Enlightenment, Freemasonry rapidly became part of Britain’s national profile and the largest and most influential of its extensive range of clubs and societies. The organization did not evolve naturally from the mediaeval guilds and religious orders that pre-dated it but was reconfigured radically by a self-appointed inner core. It became a vehicle for the expression and transmission of their political and religious views, and for the Enlightenment concepts they championed.” “Through an examination of new and previously unexplored primary documentation, Berman contributes to an understanding of the contemporary political and social culture and explores how freemasonry became a mechanism that promoted the interests of the Hanoverian establishment, connecting elite metropolitan and provincial figures. Networks centred on the aristocracy, parliament, professional societies and the magistracy are examined, as are key individuals instrumental in spreading the Masonic message. The book concludes that Freemasonry should be recognized not only as the most prominent of the many 18th-century fraternal organizations but also as a significant cultural vector and a component of the social, economic, scientific and political transformation then in progress.” 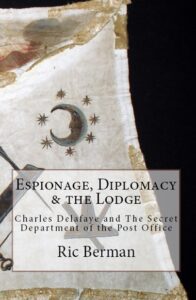 “Espionage, Diplomacy & the Lodge unveils Charles Delafaye, one of eighteenth-century Britain’s least known but most influential figures, a senior under-secretary of state, investigating magistrate, anti-Jacobite spymaster and leading freemason. Delafaye was a member of the Horn Tavern lodge and at the centre of the state’s inner circle for some two decades. He was a key conduit for intelligence from the Secret Department of the Post Office and the cryptographers and code-breakers within its deciphering branch, and central to the measures taken against the supporters of James Stuart, ‘the King over the water’. The book offers a unique glimpse into Britain’s secret intelligence service and outlines for the first time the links between Freemasonry, espionage and diplomacy.” 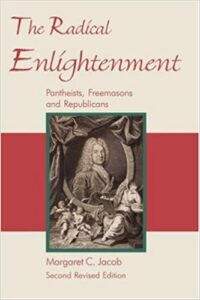 “Margaret C. Jacob’s The Radical Enlightenment – Pantheists, Freemasons and Republicans, first published in 1981, was a pioneering work and one of the first academic books in the English language to address Freemasonry, science, and the Enlightenment.  It has been described as ‘a landmark in the studies of Masonic influences regarding the period of European enlightenment’. The overall thrust of Jacob’s argument that Freemasonry transmitted English Enlightenment values, extended and cemented social and cultural ties among the elites and was an effective vector for the transmission of secular and scientific thought within Europe is unarguable.” 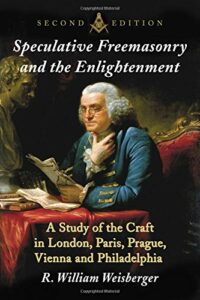 Speculative Freemasonry and the Enlightenment: A Study of the Craft in London, Paris, Prague, Vienna and Philadelphia.

“William Weisberger’s book describes how Freemasons on both sides of the Atlantic were, for the most part, either enlighteners, political reformers or moderate revolutionaries. 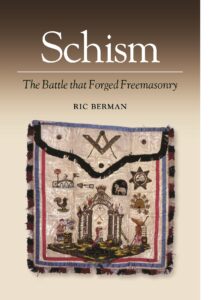 “Schism examines the creation of the Antients Grand Lodge and traces the influence of Ireland, the London Irish, and especially Laurence Dermott, the Antients’ Grand Secretary, in the development of Freemasonry in the second half of the eighteenth century. Berman demonstrates the greater accessibility of Antients Freemasonry and contrasts this with the relative exclusivity of the ‘Moderns’, the original Grand Lodge of England. Schism replaces dated Masonic histories of Irish and Antients Freemasonry, contributes to a better understanding of the London Irish in the long eighteenth century, and perhaps most importantly, offers a Masonic prism through which England’s calamitous relationship with Ireland can be explored.” 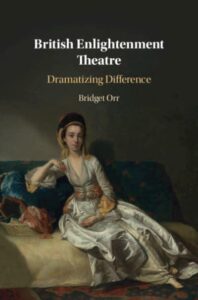 “In this ground-breaking work, Bridget Orr shows that popular eighteenth-century theatre was about much more than fashion, manners and party politics. Using the theatre as a means of circulating and publicizing radical Enlightenment ideas, many plays made passionate arguments for religious and cultural toleration, and voiced protests against imperial invasion and forced conversion of indigenous peoples by colonial Europeans… Another crucial but as yet unexplored aspect of early eighteenth-century theatre is its connection to freemasonry. Freemasons were pervasive as actors, managers, prompters, scene-painters, dancers and musicians, with their own lodges, benefit performances and particular audiences. In addition to promoting the Enlightened agenda of toleration and cosmopolitanism, freemason dramatists invented the new genre of domestic tragedy, a genre that criticized the effects of commercial and colonial capitalism.”