John Senex (1678-1740), was born in Ludlow, Shropshire. He moved to London where in 1692 he was apprenticed to Robert Clavell, later the Master of the Stationers Company. Senex was an exceptional talent, an engraver, cartographer and geographer, arguably the most skilled in eighteenth-century London. He became surveyor and geographer to Queen Anne and established a business in the Strand, and later in Cornhill and at the Globe against St Dunstan’s Church in Fleet Street, where he produced and sold maps, terrestrial globes, astronomical models and engravings, as well as scientific instruments.

Following his work on the 1723 Constitutions and recommended by Desaguliers whose scientific books he had published, Senex was rewarded with appointment as a Grand Warden, taking office in the year the Constitutions were published. Five years later Desaguliers sponsored Senex as a Fellow of the Royal Society. 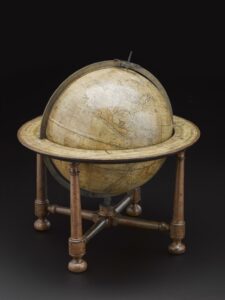 John Hooke (c.1691-1730), a bookseller, stationer and publisher, had premises at Flower-de-Luce Court (Fleur de lis Court), close to the southern end of Fetter Lane and a few steps east of St Dunstan’s.

Born in Sussex, he had been apprenticed to Charles Harper of the London Company of Stationers in 1704 and became a Freeman of the Company eight years later.

Hooke and Senex are not known to have collaborated prior to the publication of the 1723 Constitutions and do not appear to have done so afterwards other than in connection with Ephraim Chambers’ Cyclopaedia, another book with Masonic links. Both men were Freemasons, Senex a member of the Lodge at the Fleece Tavern in Fleet Street (recorded in the 1723 list of members), and Hooke a Warden of the Lodge at the Fountain Tavern in the Strand, now Royal Alpha Lodge No. 10 (1725 list).

A more detailed perspective on Senex and Hooke is available in Andrew Prescott, ‘The Publishers of the 1723 Book of Constitutions’, AQC 121 (2008).

The Senex Globe (1738) is copyright Board of Trustees of the Science Museum, London, and used under a Creative Commons Attribution Non-Commercial Licence.