In March 1734 Prince William of Orange (pictured), married the Princess Royal at St James’s Palace in London. A few months later, Vincent La Chapelle (c.1700-c.1746), joined their household and returned with them to The Hague as their ‘chef de cuisine’. La Chapelle held a reputation as one of the most influential chefs in eighteenth-century Europe. Part of the household of Philip Stanhope, 4th Earl of Chesterfield, Britain’s ambassador at The Hague, and subsequently that of the Count of Montijo, the Spanish envoy in London, La Chapelle was renowned as the author of the best-selling The Modern Cook. He has more recently been described as ‘an eighteenth-century Escoffier’, a composite of Michel Roux, Heston Blumenthal and Gordon Ramsay.

La Chapelle was also an English freemason and a Huguenot, a member of the Lodges at the Rainbow Coffee House and Prince Eugene’s Head Coffee House. And he was a probable source for Britain’s intelligence services. In that connection or otherwise, La Chapelle established the first domestic Masonic Lodge in the United Provinces, Lodge ‘L’Union Royale’, at the Lion d’Or tavern at The Hague in November 1734, becoming its first master. Founder members included Phillipe Fluvet, senior warden, Daniel Friard, junior warden, and François Liégois, Salomon Noch, and Jean Fache. Four candidates were initiated at the first meeting: Antoine Maillet, the owner of the Lion d’Or; Louis Dagran, a cloth merchant; William Constant; and N. de St. Genevieve. The names indicate a strong Huguenot connection.

Louis Dagran’s journal, Annales et Archives des Francs-Macons, suggests that the Duke of Richmond was involved with the Lodge’s foundation. On 22 November 1734, François Liégois, one of the Duke’s former employees, asked the duke to help obtain a warrant – ‘a legitimate constitution’ – from the Grand Lodge of England. It was forthcoming, despatched from London in March 1735 accompanied by a copy of the 1723 Constitutions.

A second lodge, ‘Le Véritable Zèle’, was consecrated at The Hague a year later in October 1735 with Dagran as its first master. The event was noted in Amsterdamsche Saturdagsche Courant on 3 November 1735, which recorded that the Treasurer General, Johan Cornelis Rademacher, had been made Grand Master of the United Provinces. The lodge afterwards took the name ‘Loge du Grand Maître des Provinces Unies et du Ressort de la Généralité’.

The initial reaction to the announcement was suspicion. Fearing that influence might be exerted and wary of its Enlightenment ideas which clashed with those of the political establishment, especially the church, the Dutch provinces lobbied for freemasonry to be proscribed, an interdiction that lasted from 1740-44, albeit that it was weakly enforced.

Two princes from the House of Orange held the position of Grand Master of Freemasons in the nineteenth century: Prince Frederik, the younger brother of King William II (who was also a Freemason), from 1816-81; and Prince Alexander, the youngest son of King William III, from 1882 until his death in 1884.

In the later eighteenth and throughout the nineteenth century, colonialism and the military carried Dutch Freemasonry to the Antilles, Surinam, Ceylon, India, Southern Africa, the Dutch East Indies, Brazil and China. Some Lodges endured and there are today around sixteen non-domestic Lodges under the jurisdiction of the Grand Orient of the Netherlands. 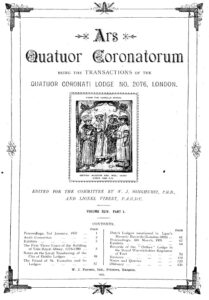