Music was one of the most important forms of recreation in eighteenth-century England. In London in particular it was at the kernel of social life at all levels, whether at the theatre or a concert, in taverns, at home, or in public places of resort, such as Vauxhall.

Many Londoners could play a musical instrument and everyone was expected to sing. In such circumstances it is unsurprising that music became a popular feature of Masonic meetings. One of the earliest songs, ‘The Entered Apprentice’s’, was written by Matthew Birkhead of the Drury Lane Theatre, a member of the Lodge of Friendship, to a tune which first appeared in 1717.

Masonic meetings were companionable events and partnered by dining and drinking. In some lodges this was restricted to periods when the Lodge was called-off; in others, otherwise. But in both there was plentiful time for toasting and singing.

Collections of Masonic songs published separately or as a part of other publications were common. Indeed, even exposures of supposed Masonic secrets, including Jachin and Boaz (1762), contained ‘songs sung at the best Lodges’. The 1723 Constitutions include four songs in its end-piece and Anderson’s 1738 Constitutions added several more. Edward Spratt’s Irish Constitutions (Dublin, 1751), contains 35 pages of songs, and Ahiman Rezon (1756) 128 pages of songs and poetry, more than half its length.

Few musical scores were original with most songs set to existing tunes known to the audience. The entertainment would also have featured non-Masonic songs, including some of the more jingoistic such as ‘Britons Strike Home’, ‘Rule Britannia’, ‘See the Conquering Hero Comes’, and ‘Hearts of Oak’, each concluded with Masonic Fire.

By design or otherwise, music reinforced Lodge camaraderie and allied Freemasonry with tradition:

Who can unfold the Royal Art?
Or sing its Secrets in a Song?
They’re safely kept in Mason’s Heart,
And to the ancient Lodge belong.

And Freemasonry became so popular that in 1731 it was thought worthwhile to publish a volume containing nothing but Masonic songs: A Curious Collection of the Most Celebrated Songs in Honour of Masonry. 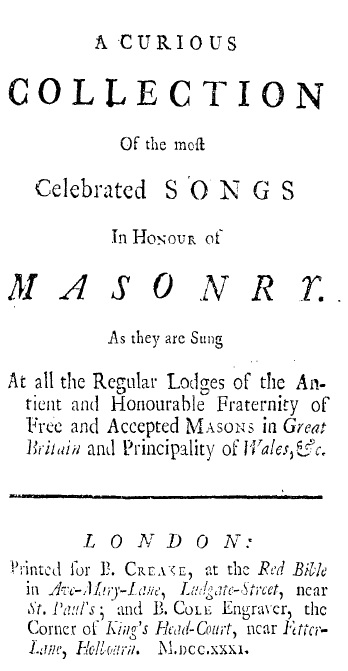