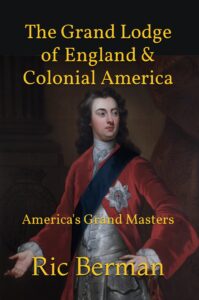 ‘Ric Berman has written a number of books on the history and development of Freemasonry in Great Britain, as well as the early years in North and South Carolina and Georgia. All are informative and enlightening, and the reader gains more knowledge after finishing his works. His latest work, The Grand Lodge of England & Colonial America: America’s Grand Masters focuses on the early Provincial Grand Masters appointed by the Grand Lodge of England to the American colonies from the 1730s to 1780s. This book was written during the 2020 lockdown and was time well spent, as Brother Berman delves into the lives and circumstances of these men’s appointments or elections, as well as background information on 18th century society. Brother Berman is adept at bringing together the many strings of these men’s lives to give a fuller picture of who they were, their foibles and strengths. He does not ignore the role of slave ownership of most of the Past Grand Masters, whether they were Southern or Northern. Prince Hall and African Lodge also receive their proper due.’ 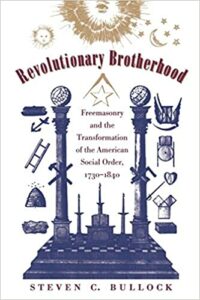 ‘Steven Bullock traces Freemasonry through its first century in America, following the order from its origins in Britain and its introduction into North America in the 1730s to its near-destruction by a massive anti-Masonic movement almost a century later and its subsequent reconfiguration into the brotherhood we know today. With a membership that included Benjamin Franklin, George Washington, Paul Revere, and Andrew Jackson, Freemasonry is fascinating in its own right, but Bullock also places the movement at the centre of the transformation of American society and culture from the colonial era to the rise of Jacksonian democracy. Using lodge records, members’ reminiscences and correspondence, and local and Masonic histories, Bullock links Freemasonry with the changing ideals of early American society. Although the fraternity began among colonial elites, its spread during the Revolution and afterward allowed it to play an important role in shaping the new nation’s ideas of liberty and equality. Ironically, however, the more inclusive and universalist Masonic ideas became, the more threatening its members’ economic and emotional bonds seemed to outsiders, sparking an explosive attack on the fraternity after 1826. American History.’ 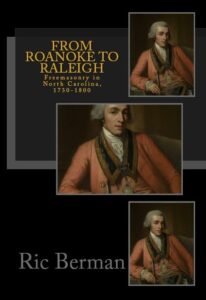 ‘We are fortunate to live in an era of great progress in the scholarly exposition of Masonic history. Brother Ric Berman, FPS, the author of numerous books – among them The Foundations of Modern Freemasonry (2012), Schism (2013), and Loyalists and Malcontents (2015) – has provided us with yet another key contribution to the understanding of the fraternity’s past. From Roanoke to Raleigh is a well-documented and enlightening tour of eighteenth-century North Carolina Freemasonry… The value of a work like this cannot be overstated when you consider that we are currently decades into an anti-intellectualism movement that has threatened to rid American Freemasonry of any hope for scholarly products or even scholarly attempts at understanding pieces of our past. From Roanoke to Raleigh then is important as a comprehensive study of early North Carolina but also as an example for how Masonic historians should approach the telling of their own Lodge or jurisdictional histories.’ 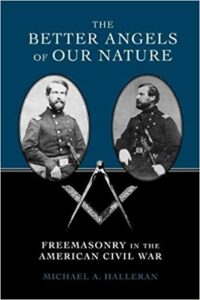 ‘The first in-depth study of the Freemasons during the Civil War. One of the enduring  themes in Civil War lore is the belief that on the field of battle and afterward, members of Masonic Lodges would give aid and comfort to wounded or captured enemy Masons, often at great personal sacrifice and danger. This work is a deeply researched examination of the recorded, practical effects of Freemasonry among Civil War participants on both sides. From first-person accounts culled from regimental histories, diaries, and letters, Halleran has constructed an overview of 19th-century American freemasonry in general and Masonry in the armies of both North and South in particular, and provided telling examples of how Masonic brotherhood worked in practice. Halleran details the response of the fraternity to the crisis of secession and war, and examines acts of assistance to enemies on the battlefield and in POW camps.’

Alexandre Barat’s Freemasonry and Brazilian Enlightenment examines Masonic activity in Brazil’s political processes, suggesting that Freemasonry was one of the main institutions involved in the struggle to establish a new national identity and confronting the Catholic Church directly. 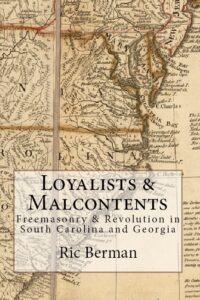 Loyalists & Malcontents tells the story of Freemasonry in South Carolina and Georgia from the 1730s to the War of Independence and beyond.

The book describes how South Carolina and Georgia’s Masonic Lodges and their members in Charleston, Savannah and elsewhere were linked to their counterparts in England; draws portraits of the planters, lawyers, merchants and officials who comprised the South’s Masonic elites; and explores how Southern Freemasonry evolved as American Independence drew ever closer.