Beautifully engraved by John Pine, the frontispiece to the 1723 Constitutions offers an image of John Montagu, 2nd Duke of Montagu, Grand Master in 1721, presenting the Constitutional Scroll and a set of compasses to Philip, Duke of Wharton, his successor. Each is attended by his respective Grand Officers. Dressed in clerical vestments, Dr Jean Theophilus  Desaguliers is placed on the far right.

In the central background framed by two rows of columns is an image of the parting of the Red Sea. Referencing the flight of the Israelites from Egypt and their journey across the Sinai Desert to the Promised Land, the image symbolises redemption and ‘obtaining possession’. The pillars display the five orders of architecture: Doric, Ionic, Corinthian, Tuscan, and Composite. They might also allude to the five monarchs who supported Wren’s reconstruction of St Paul’s Cathedral (1675-1708): Charles II, James II, William & Mary, and Queen Anne. 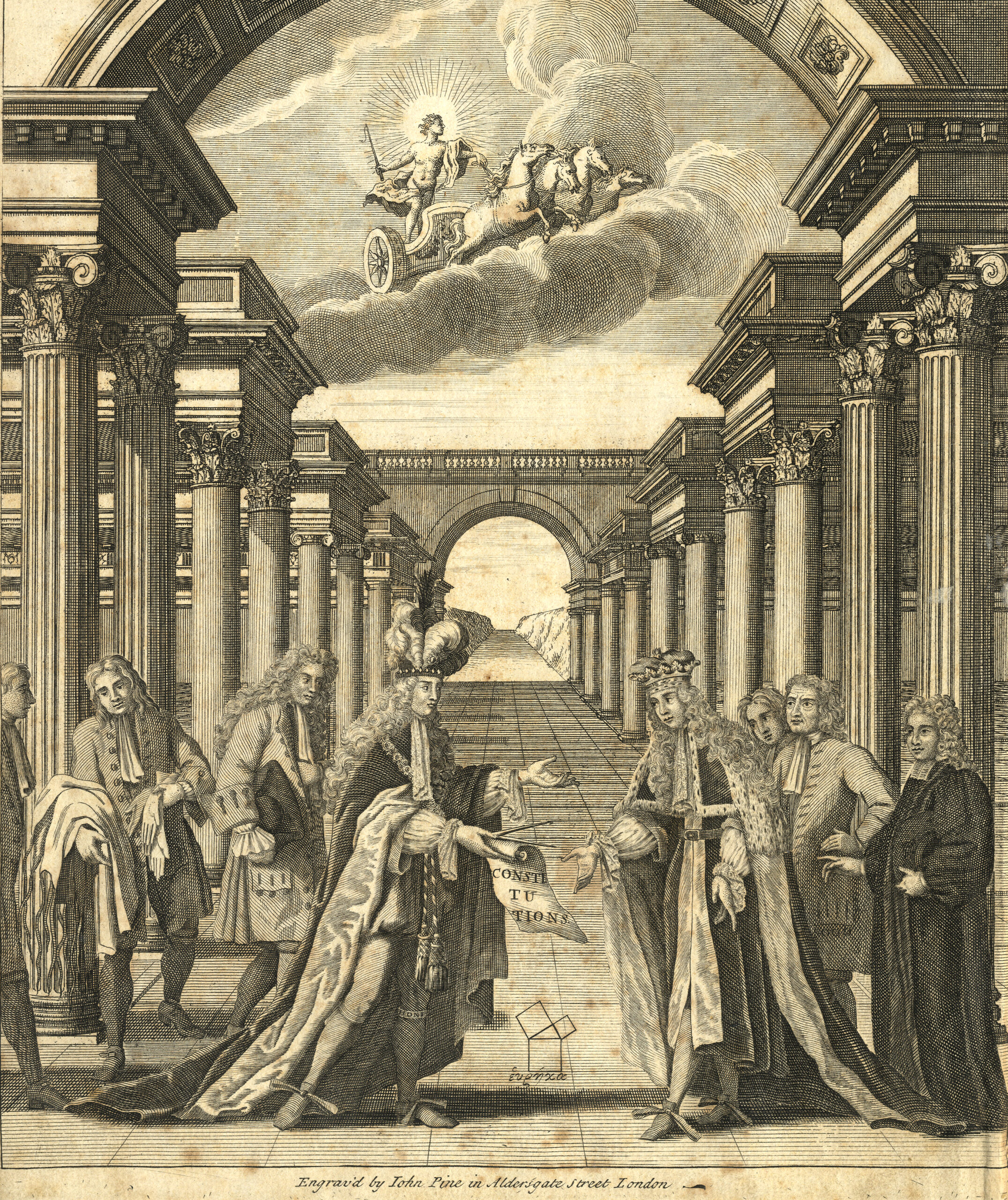 In the immediate foreground between the two Grand Masters is a representation of Euclid’s 47th proposition: a right-angled triangle with the square on the side opposite the right angle equal to the sum of the squares on the other two sides. The symbol is associated with architecture and worn by a Past Master of a Masonic Lodge. Underneath is the Greek word Eureka, a reference to Archimedes’ exclamation ‘I have found it’. The word is related to ‘heuristic’ and describes experience and observation-based techniques for learning and problem-solving.

Apollo, the son of Zeus, a god in both Greek and Roman mythology, is drawn in the sky at the reins of a chariot: an allegorical representation of the sun approaching its meridian. Apollo was the god of healing, music and poetry, the leader of the Muses and the patron deity of Delphi. The intention is to impress upon the viewer a sense of philosophical, scientific and spiritual well-being, and to imply divine approval.

John Pine, one of London’s foremost engravers, also produced the early directories of Masonic Lodges which detailed the names, signs, locations and dates of Lodge meetings. The lists were updated regularly. An example from 1725 is shown below. 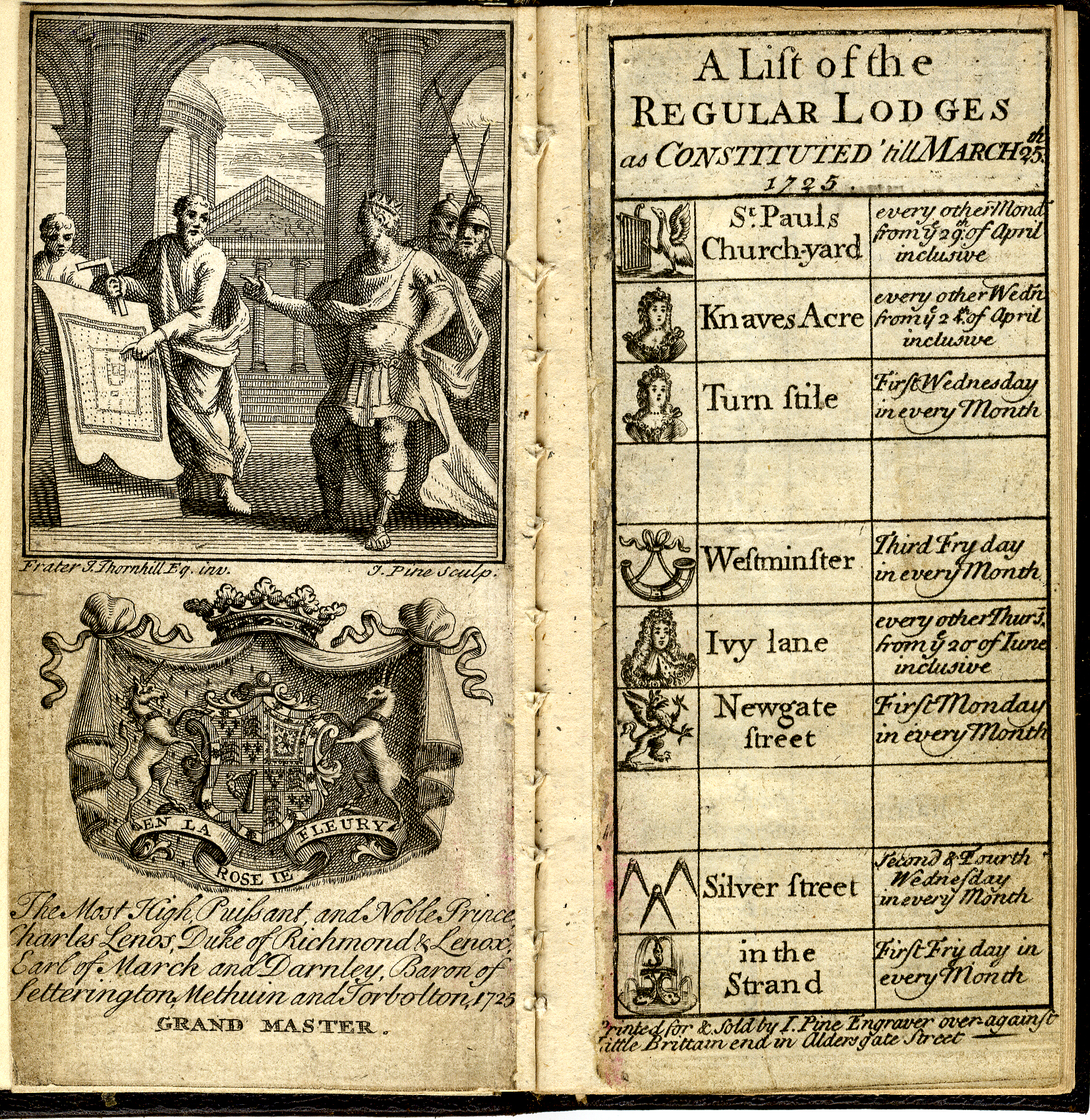 More information on Masonic frontispieces is available in Martin Cherry’s paper: ‘The Frontispieces of the Book of Constitutions, 1723-1819’. Martin, the Librarian at the Museum of Freemasonry in London, offers a personal take, as does Chris Powell in his paper on a 1723 engraving of the List of Lodges by Pine, released within a few weeks of the publication of the 1723 Constitutions. The paper, ‘Pine’s List of Lodges’, is from ‘Notes & Queries’, AQC 131. The 1723 engraving itself can be viewed here.

Finally, it is worthwhile reading a fascinating paper by Ricky Pound – The Architectural Sources for the Frontispiece of the 1723 Constitutions.