The Rev. Dr Jean (John) Theophilus Desaguliers (1683-1744), reformulated English Freemasonry, creating an organisation that reflected (and reinforced) the political and philosophical transformation then underway in Britain. He was born on 12 March 1683 at Aytré, a village near La Rochelle, to a Huguenot (Protestant) family that fled France for England the same year. Brought up in relative poverty, Desaguliers was educated at his father’s ‘French School’ in Islington, London, and at Bishop Vesey’s School in Sutton Coldfield, and in 1705 was admitted to Christ Church, Oxford, as a servitor scholar. He read divinity and experimental natural philosophy, studying under John Keill (1671-1721), a Fellow of the Royal Society and acolyte of Sir Isaac Newton, its President.

Keill introduced Desaguliers to Newton and to the Duke of Chandos, one of England’s wealthiest men, a fellow member of the Royal Society’s Council. The introductions boosted Desaguliers’ career: Newton’s sponsorship led to his election as FRS, with his entrance and ongoing fees waived ‘in consideration of his great usefulness to the Royal Society’; and in Chandos Desaguliers secured a wealthy, well-connected, entrepreneurial patron.

Desaguliers obtained his BA in 1709 and was ordained a deacon in the Church of England the following year by Bishop Compton at Fulham Palace. He received his MA in 1712 and in 1713 following his marriage to Joanna Pudsey, settled in London. He returned to Oxford periodically to lecture and was awarded a doctorate in 1719.

In London Desaguliers lived first in Plough Yard, close to the Royal Society’s premises in Crane Court. But in 1715 he moved to Channel Row, Westminster. He remained there until 1735 when the area was razed to clear the approach to the new Westminster Bridge. His house was close to the Rummer & Grapes tavern and to New Palace Yard, home to many of Desaguliers’ colleagues in Grand Lodge and to the Horn Tavern, where the lodge at the Rummer & Grapes later relocated.

Desaguliers’ scientific lectures were exceptionally fashionable. Science was emerging into popular culture and interest in Newton’s theories had spread beyond Oxbridge and the Royal Society to coffee houses and taverns. Desaguliers’ experiments and lectures entertained as well as informed, and demonstrated to his audiences the effects of electricity, the physical properties of gases, optics, and the orbits of the moon and planets.

The Science Museum in London holds a number of instruments and objects made or designed by Desaguliers including a ‘Cometarium’ used to explain the path of a comet and owned by one of his students, the natural scientist Stephen Demainbray. The central brass ball represents the Sun and a smaller ball in an elliptical groove represents the comet. Turning the handle moves the comet around the ellipse and shows the time elapsed. 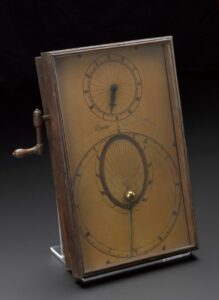 The image below is of a model ‘Maximum Machine’ similarly designed by Desaguliers. 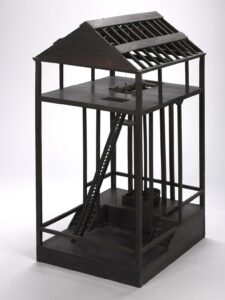 Within a few years Desaguliers had become the pre-eminent Newtonian lecturer on the private and public lecture circuits, demonstrating and explaining mechanics, hydraulics, and optics. Desaguliers recognised that the commercialisation of science, and engineering in particular, could address practical concerns and supply practical solutions. Science was becoming less theoretical and more empirical and, in Stephen Pumfrey’s words, had become ‘infiltrated by the values of trade, the market place and the monied interest’.

Desaguliers was probably introduced to freemasonry by George Payne, Richmond’s deputy at the Horn Tavern, and he subsequently became a member of several other lodges, including Solomon’s Temple.

As a senior member of the newly formed Grand Lodge and its Grand Master in 1719, Desaguliers was a pivotal figure and successfully and actively promoted freemasonry. His status within Grand Lodge and as Master of several influential constituent lodges gave him a powerful platform and he was instrumental in re-working the Masonic Charges and altering English Ritual (including, possibly, the development of the Third Degree, introduced around 1723). Desaguliers also helped develop a federal governance structure for freemasonry, oversaw the introduction of lectures at lodge meetings, introduced (or, as he put it, ‘revived’) the ‘ancient toasts’ at lodge dinners and promoted the concepts of Masonic sociability and benevolence.

The Hanoverian succession (seen as a bulwark against Jacobitism), religious tolerance, constitutional parliamentary government, and the rule of law, were central to the protection of the Huguenot community in Britain and it is unsurprising that Desaguliers influenced English Freemasonry to support these objectives. Professor Margaret Jacob has termed this the ‘mentality of official masonry’ – a ‘taste for science… craving for order and stability… worldly mysticism [and] rituals, passwords and mythology, [and a] religious devotion to higher powers, be they the Grand Architect, the king or the Grand Master’.

Further information on Desaguliers can be obtained in Audrey Carpenter’s John Theophilus Desaguliers: A Natural Philosopher, Engineer and Freemason in Newtonian England, and Ric Berman’s The Foundations of Modern Freemasonry.

Images are copyright Board of Trustees of the Science Museum, London, and used under a Creative Commons Attribution Non-Commercial Licence.