The Frontispiece that illustrates the 1723 Constitutions is designed to impress. It depicts John, Duke of Montagu, wearing the robes of the Order of the Garter, presenting the Constitutional scroll and compasses to his successor, Philip, Duke of Wharton (1698-1731). Each man is supported by his respective Deputy Grand Master and Grand Wardens: John Beale, Josias Villeneau and Thomas Morris are to the left; and William Hawkins and Joshua Timson to the right next to Dr Desaguliers, dressed in clerical robes. A colonnade of pillars representing the five orders of architecture is shown in perspective and frames the transfer of Masonic authority from Montagu to Wharton.

But the picture of seamless transition was a probable fiction.

Wharton had been made a freemason at the age of twenty-two, a few months after Montagu’s installation as Grand Master. Applebee’s Original Weekly Journal noted on 5 August 1721 that ‘the Ceremonies being performed at the King’s Arms Tavern… His Grace came Home to his House in the Pall-Mall in a white Leathern Apron’.

Wharton was in many ways an archetypical rebellious youth. But his mercurial approach to life lasted from his teens into adulthood and was at the opposite end of the spectrum to his father, Thomas, a leading supporter of William and Mary and opponent of James II. Under William and Mary and then Queen Anne, Thomas Wharton was made a Privy Councillor, Comptroller of the Royal Household, and served as Lord Lieutenant of Ireland, Lord Lieutenant of Oxfordshire and Buckinghamshire, and Lord Privy Seal, with numerous titles including Marquess of Catherlough, Earl of Rathfarnam and Baron Trim in the Irish Peerage, and Marquess of Wharton and Marquess of Malmesbury in the English.

Philip Wharton’s godparents included William III, the Duke of Shrewsbury, and Queen Anne. And when he inherited in 1715 he gained impeccable political connections, a vast financial inheritance and six titles in the English and Irish Peerage. But he rebelled nonetheless. A Grand Tour the following year to satisfy an obligation in his father’s Will that he visit Geneva to continue his religious education was abandoned and Wharton travelled instead to France to visit the Pretender, James Stuart, at Avignon, who invested Wharton Duke of Northumberland. This was potentially treasonable and could have been disastrous but was overlooked by London and regarded as a youthful misdemeanour. After all, Wharton was only 17. On his return, despite his age, Wharton was allowed to sit in the Irish Parliament, sworn a Privy Councillor, and in January 1718 as a further incentive to good behaviour he was created Duke of Wharton. 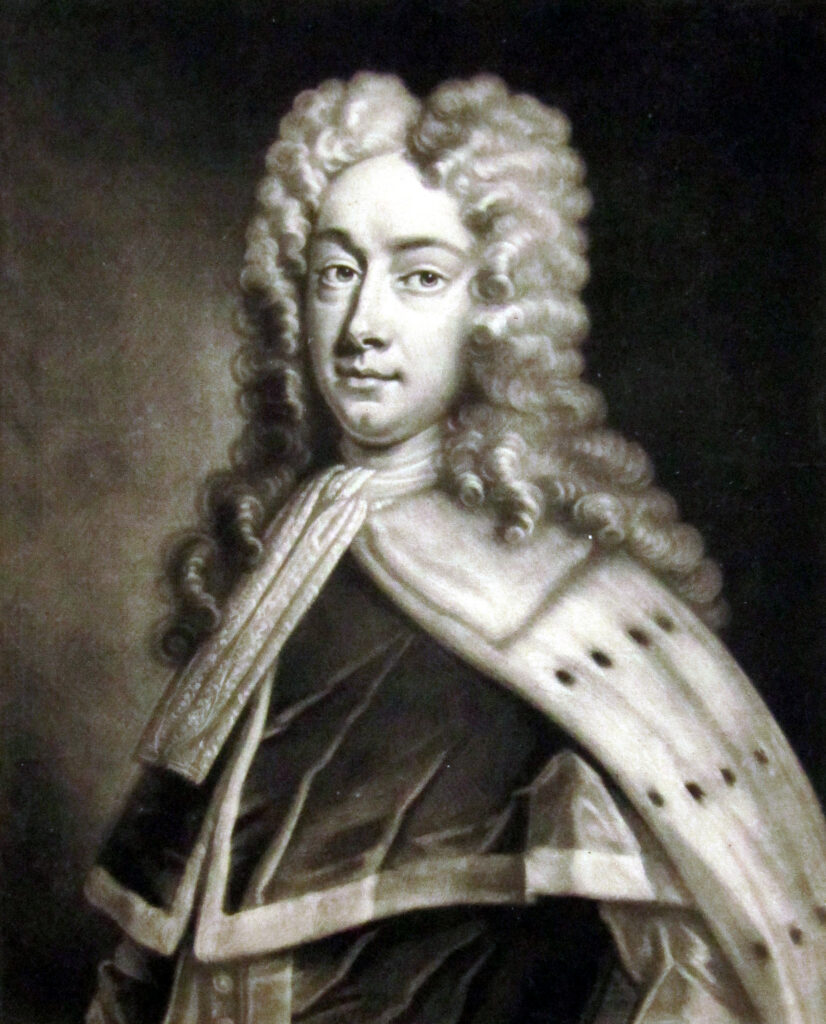 Wharton took his seat in the House of Lords in December 1719. He appeared to have mellowed and his speeches were generally pro-government, encouraging a belief that Wharton’s dukedom had ensured his loyalty. This was soon proved wrong. Wharton’s politics were driven by self-interest and he launched an effective and widely publicised attack on the government’s handling of the South Sea Company crisis, condemning it as ‘dangerous bait which might decoy unwary people to their ruin’. His words were accurate but not altruistic. Wharton had speculated and reputedly lost some £120,000, the equivalent of many millions today.

Handsome and intelligent, Wharton was a classic rake. His interests outside of Parliament revolved around whoring, gambling, drinking and mischief making. He also co-founded the first Hell Fire Club.

Anderson suggests that Wharton sought to usurp rather than succeed Montagu as Grand Master, either to commandeer what he may have viewed as a potentially influential organisation or simply to cause a nuisance:

Philip, Duke of Wharton lately made a Brother, tho’ not the Master of a Lodge, being ambitious of the Chair, got a number of others to meet him at Stationers Hall 24 June 1722. And having no Grand officers, they put in the Chair the oldest Master Mason… and without the usual decent Ceremonials, the said oldest Mason proclaimed aloud Philip, Duke of Wharton, Grand Master of Masons… but his Grace appointed no Deputy nor was the Lodge opened and closed in due Form. Therefore the noble Brothers and all those that would not countenance irregularities disowned Wharton’s Authority, till worthy Brother Montagu heal’d the Breach of Harmony, by summoning the Grand Lodge to meet 17 January 1723 at the King’s Arms aforesaid, where the Duke of Wharton promising to be True and Faithful, Deputy Grand Master Beale proclaimed aloud the most noble Prince and our Brother Philip Duke of Wharton, Grand Master of Masons, who appointed Dr Desaguliers the Deputy Grand Master and Joshua Timson and James Anderson Grand Wardens.

Notwithstanding Anderson’s one-sided record of events, Wharton was accepted as Grand Master and Desaguliers and other pro-Hanoverian freemasons attended the Grand Feast held on 25 June to mark his installation. The occasion was reported in the Compleat Set of St James’s Journals on 28 June 1722 and in near-identical terms in other newspapers, The London Journal (30 June 1722) commenting that membership of the Society was some 4,000, an astonishing achievement if accurate.

But Wharton’s anti-Hanoverian display at his installation made him enemies and his exodus from Grand Lodge in June 1723 cemented the pro-Hanoverian nature of Freemasonry under Desaguliers’ aegis. It took place within a week of Wharton’s speech in the House of Lords in defence of Francis Atterbury, the Jacobite Bishop of Rochester, against a charge of treason. Support for Jacobitism was not an image that Desaguliers and others wished to project in connection with Freemasonry nor one with which they wished to be associated.

Wharton had waived his right to name a successor Grand Master, possibly in the conviction that his friends might move his re-election, leaving Grand Lodge to make its own choice. But rather than reselect Wharton, Grand Lodge chose the young Earl of Dalkeith who named Desaguliers his Deputy and Francis Sorrel and John Senex his Wardens. The Minutes were written contemporaneously by Grand Lodge’s new Secretary, William Cowper.

Wharton’s attempt to gain control of English Freemasonry instigated changes to forestall future subversion. A resolution was passed which confirmed that ‘it was not in the power of any body of men to make any Alteration or Innovation in the body of Masonry without the consent first obtained of the Annual Grand Lodge’. And the following June it was agreed that the Grand Master at his installation ‘shall next nominate and appoint his Deputy Grand Master’, an important change since in practice the Deputy Grand Master exercised authority in the name of the Grand Master.

Wharton continued to hone his anti-Hanoverian rhetoric, funding an anti-government journal, The True Briton, and creating an alternative fraternal society, ‘The Gormogons’:

It is a testament to the interest generated by Wharton and Freemasonry that the press took up the affair and that William Hogarth believed the public’s curiosity to be sufficiently large to justify the production of a satirical print. But aside from Hogarth’s The Mystery of Masonry brought to light by the Gormogons, little more was heard and Wharton’s attention was captured by other interests. He formed a second society the same year: ‘The Schemers’, ‘for the advancement of that branch of happiness which the vulgar call whoring’. 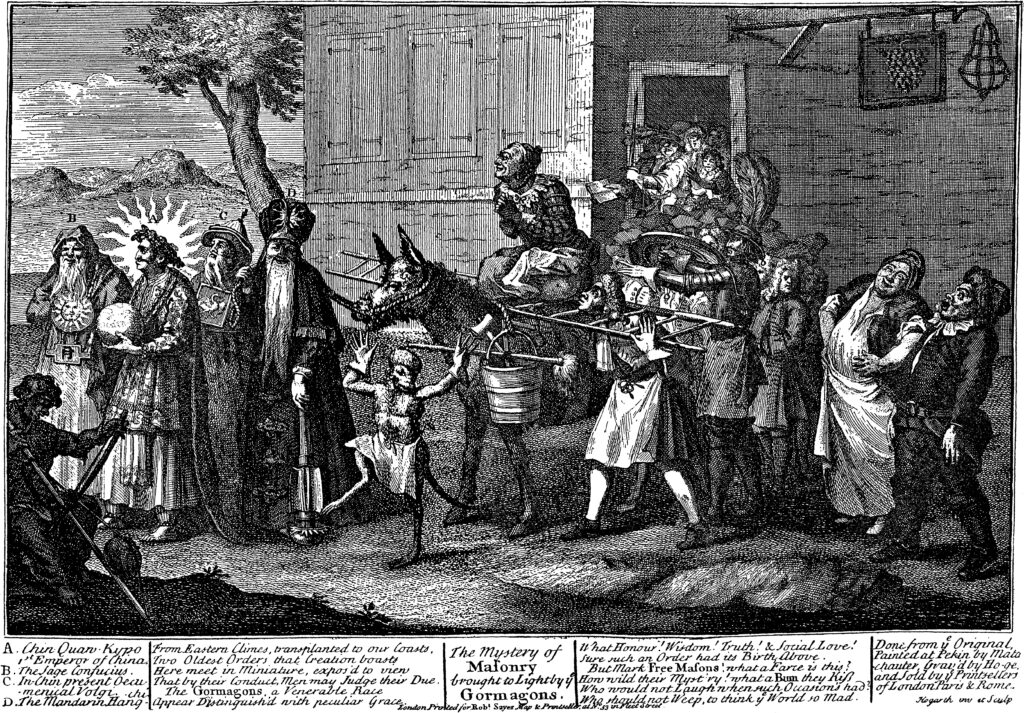 Wharton’s financial profligacy forced him to sell his assets and seek relief for his debts in Chancery. But his pro-Jacobite politics and dissolute lifestyle afforded little political, public or judicial support. He left England for continental Europe in June 1725 and after a short period in Paris travelled to Madrid where he enlisted in the Spanish army and appeared against the British at Gibraltar. Despite this, in 1728 Wharton co-petitioned Grand Lodge to form a Lodge in Madrid. The petition was granted and the Lodge established by Charles Labelye, one of Desaguliers’ acolytes, who became its first Master. Anecdotally, Labelye may have reported on Wharton’s activities to the British government.

Given his reduced circumstances, Wharton’s continuing interest in Freemasonry is understandable since its burgeoning reputation in Europe offered prestige. At that point Wharton was still a duke and he may have hoped to regain political favour with London. If so, he failed. Wharton was outlawed by Parliament on 3 April 1729 for failing to appear to answer a charge of treason and his titles and property were declared forfeit. Wharton died a pauper at the Cistercian Monasterio de Santa María de Poblet in Catalonia just two years later in 1731. He was thirty-three.