Isaac Newton (1642-1727), one of the most influential mathematicians and natural philosophers of the seventeenth and eighteenth centuries, if not of all time, was not a freemason but his philosophical approach to understanding the natural world, a methodology centred on reason, would become a keystone of Modern Freemasonry.

Descartes’s Geometry, Franz van Schooten’s Miscellanies, William Oughtred’s Clavis, and the works of other leading European thinkers gave Newton an intellectual platform from which he launched his studies into mathematics, optics, and mechanics. His genius was recognised by contemporaries. He was awarded the Lucasian Chair of Mathematics at Cambridge in 1669, one of only eight named chairs in the university at the time, and Principia Mathematica, his opus, was published in 1687.

Sinecures as Warden, then Master of the Royal Mint followed, with Newton choosing to take an active role in both positions. He was elected President of the Royal Society in 1703 and gained a knighthood two years later, the first scientist in Europe to be so honoured. Opticks was published in 1704-6 and a second, revised edition of Principia Mathematica in 1713. 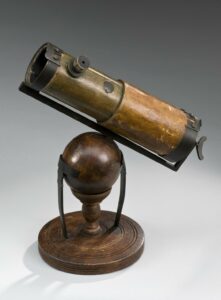 From a theological perspective, Newton saw no inherent conflict between a belief in God, ‘the All-wise and Almighty Architect of the Universe’, and the natural order, a world interpreted through rational observation. The same view was held by Desaguliers, who wrote in his Foreword to Lectures in Mechanical and Experimental Philosophy (London, 1717), that

Natural Philosophy is that Science which gives the Reasons and Causes of the Effects and Changes which naturally happens in Bodies… We ought to call into question all such things as have an appearance of falsehood, that by a new Examen we may be led to the Truth.

The idea would become part of the Masonic mainstream:

As Masons we only pursue the universal Religion or the Religion of Nature. This is the Cement which unites Men of the most different Principles in one sacred Band and brings together those who were most distant from one another.

Newton’s approach to science altered how the world was observed and understood. He set out demonstrable theories of gravity, planetary motion and optics, creating a framework for modern science. Experiments were conducted with detailed measurements based on reproducible observations, with further experiments to test the theories formulated.

Newton was correct when he remarked that ‘If I have seen further, it is by standing on the shoulders of giants’. But he is viewed nonetheless among the greatest of such giants.

Newton’s work had broad implications and the dissemination of Newtonian theories across continental Europe was not merely a function of academic curiosity. It also served a political purpose, emphasising the benefits of constitutional government and advertising the economic benefits that followed.

In Desaguliers’ phrase, the perfect political form was that ‘which does most nearly resemble the Natural Government of our System, according to the Laws settled by the All-wise and Almighty Architect of the Universe’:

By his example, in their endless Race, The Primaries lead their Satellites,
Who guided, not enslav’d, their Orbits run, Attend their Chief, but still respect the Sun,
Salute him as they go, and his Dominion own.

The spread of Newton’s theories and philosophical approach was regarded as, and was, an attempt to displace Cartesianism, a philosophy that held that knowledge, and scientific knowledge in particular, can be derived a priori through deductive reasoning rather than rational observation. In Desaguliers’ words, Newton’s works would rout ‘this Army of Goths and Vandals in the philosophical World’ and underline the superiority of a rational world marked by social stability and mercantile success.

Isaac Newton’s reflecting telescope (replica) copyright Board of Trustees of the Science Museum, London, and used under a Creative Commons Attribution Non-Commercial Licence.